An ISOGRAM (also known as a "nonpattern word") is a logological term for a word or phrase without a repeating letter.

In the book 'Language on Vacation: An Olio of Orthographical Oddities' (1965), Dmitri Borgmann tried to find the longest isogrammic word. The longest one he found was "dermatoglyphics" at 15 letters.

And later in the book 'Making the Alphabet Dance' (1997), Ross Eckler reports the word "subdermatoglyphic" at 17 letters; the word can be found in Lowell Goldmith's article: 'Chaos: To See a World in a Grain of Sand and a Heaven in a Wild Flower'.


* Etymology of the word 'dermatoglyphics':
Coined in 1926 by Dr Harold Cummins (1893-1976) from Greek dermato- (skin) + glyphein (to carve). Ultimately from the Indo-European root gleubh- (to tear apart) that is also the source of cleve, glyph, clever, and clove (garlic). And that's also where we get cleavage, cleft palate, and cloven hooves 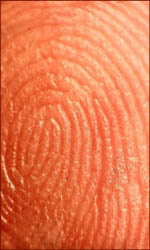