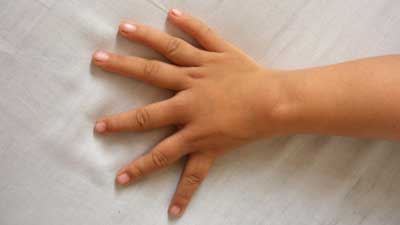 Sometimes people have problems to discriminate 'right' from 'left'... but this young girl from China presents us with a more unusual problem:

Is this her right hand? Or left hand?
(This hand is almost like solving a Buddhistic Kõan-puzzle - for example: 'What is the sound of one hand?')

Hello Martijin,
Yes the case is quite abnormal but here is a family with abnormal hands.

THIS IS A CASE OF FAMILY WITH ABNORMAL HANDS:

Inquiry showed that his father was normal; the paternal grandmother had webbed ringers on both hands, but the fingers involved could not be learned; a paternal male cousin had deformities exactly like those shown here in the picture, except for the rudimentary digit growing from the first finger of the left hand in this case; a sister of this cousin was described as an imbecile. You can view here:

The case well illustrates how a stock of rather low mentality is often characterized by Physical Defects, which are evidently due to heredity though not identical in each generation.

In answer to the question how far hand deformation can reveal low mentality in Palmistry I would say according to my experience that in such a severe case the subject is having a mental age of three to seven years only. I have found so.

It is the criteria of medical people to research and decide how much physical deformation or defect reveal imbecile.
Parender Sethi
http://www.palmistryforyou.in/

The report you presented is from the year 1916 - which is fine, except that the described association with low mentality appears to be not confirmed by later studies.

For, today medical experts describe that both 'polydactyly' (my example) and 'syndactly' (your example) usually do not indicate the presence of a mental handicap.

"It happens either as an isolated anomaly or as part of a syndrome. ... Syndactyly is thought to occur about once in every 2000 to 2500 births and is twice as common in males. Unilateral and bilateral cases occur about equally, and it is 10 times more common in whites than blacks." I have the opinion that Polydactyly - extra fingers -does not denote mental retardation or low mentality. It is quite common.

But, now, I can take it granted that Syndactyly too -birth defects in which there is partial or total webbing connecting two or more fingers or toes- do not reveal imbecile. Thank you.