The Truth about Your Nails!

The Truth about Your Nails!

... Just found the following article presented by a beauty journalist from London - named Emily; her article describes e.g. the meaning of nail color & nail texture, featured with by an excellent presentation!!

I think it's a good read, and especially useful for those who are not yet familiar with the health issues that our fingernails can unveil.

See: The Truth about Your Nails

Just to provide an impression, Emily's introduction of the article includes the following:

'As expressed by Shakespeare and also in the Holy Bible, our “eyes are the windows to our soul.”

Our eyes are able to reveal the truth to our feelings, and mental state of mind. Our nails, can do the same with our health and physical state.

Nails are not just nails. They are part of the skin layer and are made up of hard protein called keratin, so that they can protect the sensitive tips of our fingertips and toes. Nails are in the same appendage as hair, teeth, and skin.
Therefore what changes in our hair, skin or nails is our body’s way of telling you that something in your health has changed.

Nails grow at an average rate of 1mm per week (twice the rate of our toenails) and it takes an overall six months to grow a full nail from the bottom to top.

As a result they act as a record, accurately revealing your physical health and general well-being during this time. For this reason, nails are therefore able to provide important clues to any underlying disorders, food intolerances, nutritional imbalances, and may also be the first sign of internal disease. Depending on the marks, ridges, odd colors, spots, or change of shape can indicate anything from a previous fever to kidney problems, and even lung and skin cancer.

How our nail changes, is its way of telling you what may be wrong inside your body- things you may or may not see or feel. Doctors often use these abnormal marks or color in the fingernails in order to find the right diagnosis for serious health problems.

Healthy fingernails should have pink nail beds, the nail plate should be strong (not brittle and nor too thin) and contain no lines or marks. It should feel smooth with no ridges or grooves.'

And of course... you can find much more info about other nail conditions in:


NOTICE: In Emyli's article the following fingernail conditions are explained!

A Dutch 2011 publication reports that 'dry skin' & 'nails striped' (I suppose this refers to vertical nail ridges) have been reported to occure more often in autism, see table 2 included in the article:
Morphological Features in Children with Autism Spectrum

Maybe this result makes sense in the perspective that pronounced 'ridges on the nails' are e.g. associated with stress (especially when the direction of the ridges is positioned horizontal,, which is also mentioned in the article published by beauty journalist Emily: see the first post in this topic).

Here you can read more about how to discriminate 'normal' nail ridges from more pronounced fingernail ridges (as seen in the photo below) - e.g. your nails should 'feel' smooth:
http://thedermblog.com/2008/03/20/what-causes-vertical-ridges-in-your-nails/ 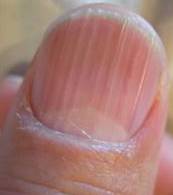 ... Last week I received confirmation from the researcher that the 'nail stripes' mentioned in the autism study indeed relate to vertical nail ridges - which are more often seen as showing pronounced development in children with autism. Probably a sign of 'heavy stress'!

So, there is probably no direct connection between autism and IBS.

I think the following knowledge on color of your fingernails can be useful.

The color of your fingernails and toenails can often reveal certain serious health conditions. Nails should generally be a healthy pink color.

Fingernail color and condition changes are rarely the first clue of serious illness. In most instances, patients will manifest other signs or symptoms of disease before nail changes become evident. Nail colors can be grouped into black, blue, brown/copper, green, blue-green, grey, yellow, pale, purple or red groups, and each color means something different.

Please note - this information regarding your nail color mirroring your general health, is provided for information purposes only, and should NOT be used to diagnose or treat any illness. If in doubt regarding your health, please consult your doctor.

Also keep in mind that your nails may look a particular way for another reason totally unrelated to your health, but could be due to mechanical or environmental influences. Your beauty therapist and manicurist should also be able to guide you in this field.

When healthy fingernails begin to change color or texture, one of the most common underlying causes is nail fungus, which can cause the nails to crack, peel, and change color and texture. Common disorders like thyroid disease can also cause abnormalities in the toenail and fingernail beds, often producing dry bittle nails that crack and split easily.

Blue nails
May be indicative of pulmonary obstruction, emphysema or lung disease. Blue fingernails may represent a type of cyanosis caused by a lower level of lack of circulating oxygen in the red blood cells. It may also represent a high level of an abnormal form of haemoglobin in the circulation. If normal color returns upon warming and/or massage, the cause is due to the body part not getting enough blood supply due to cold, constriction (of the tissues or the blood vessels that supply the tissues) or some other reason. If the fingernails remain blue, then there may be an underlying disease or structural abnormality interfering with the body’s ability to deliver oxygenated red blood to the body.

White fingernails
May be indicative of kidney or liver disorders or anaemia. White lined bands across the nail beds can signal a protein deficiency.
White spots on nails
In most cases this is due to a zinc deficiency or injuries to the nail bed. It can however also be indicative of certain internal problems such as arthritis, or from poisoning. Although it has been noted that white lines can be symptoms of a serious disorder, their presence is more than likely a result of iron or zinc deficiency.

White areas under nails
When there are white areas visible under the nail, normally at the tip of the nail where it joins the nail bed, this normally indicates a fungal infection and must be treated medically. Half white nails, with dark spots, especially on the tip, may be indicative of kidney diseases.

Green nails
Can be caused by allergies to cleaning agents, Bacterial infection such as Bacillus infection, localized fungal infection, and serious emphysema.

Yellow nails
Can be indicative of problems with the lymphatic system, respiratory disorders, diabetes or liver. Yellow discoloration in your fingernails may result from a respiratory condition, such as chronic bronchitis, or from swelling of your hands (lymphedema). In yellow nail syndrome, nails thicken and new growth slows, resulting in discoloration. Nails affected with this condition may lack a cuticle and may detach from the nail bed in places.

Darkening of nails (on the sides)
This may be indicative of kidney disease.

Lines (red or brown)
Splinter haemorrhage shows up as red or brown lines along the long axis of the nail and may be caused by endocarditic (an inflammation of the heart membranes) or trichinosis (a parasitic infection from undercooked pork). A simple dark blue line in the fingernail can be a sign of skin cancer. Tiny black streaks can indicate a possible heart problem, and thin black lines on the nail often indicate a heart disease.

You can read more: http://www.disabled-world.com/health/dermatology/nails/nail-color.php#ixzz1HdH7Sgn9

Color changes in nails:
• A black nail may be caused by an injury.
• Bleeding or bruising under an injured nail will cause a black or purplish appearance. It may be necessary to have the blood drained from under the nail. The black appearance will most often go away as the injury heals, but this may take weeks.
• Occasionally the black appearance under an injured nail may indicate damage to the nail matrix, the area where the nail first begins to form. If this is the case, it may be necessary to remove the nail and repair the matrix.
• Blue nails may occur as a side effect of a medication. Blue nails are also caused by problems that reduce the amount of oxygen in the blood.
• Brown streaks occur normally in dark-skinned persons and are of concern only if they are new or changing. Brown streaks may also be caused by a medication or malnutrition.
• Green discoloration may be caused by bacterial infections.

• Pale white nails may be caused by nutritional disorders, such as anaemia or zinc deficiency, or other medical problems.
• White specks, spots, or bands (leukonychia) in the nail are common with mild injury. You may not even have been aware of the injury. These marks can last for weeks or months and go away on their own without any treatment.
• Yellow nails occur when the nail separates from the nail bed (onycholysis) because of an injury, a skin condition, or an infection. It is also caused by medical problems such as chronic lung disease or cancer. Nails can also become yellow from smoking cigarettes or from using some nail polishes, especially red polish.

So, there is probably no direct connection between autism and IBS.

And I would like to add that gastrointestinal problems in general appear to be associated with other abnormal variations in the fingernails (not pronounced ridges). But I would need to do more literature research to find examples.

various kinds of autism, to say its from MacDonald well???
Though I feel a bad diet with a leaky gut syndrome causes peptides in the blood brain barrier could affect some people ,ie eye contact and ability to function academically
Change the diet with exercise and more fluids ie water, the ie contact and concentration Confidence and skills will get better
though I also feel the worse autism, ie banging your head against a wall is more on the hereditary scale and is more apparent when very you ie 1 year to 18 months..

weepingwillow wrote:various kinds of autism, to say its from MacDonald well???
Though I feel a bad diet with a leaky gut syndrome causes peptides in the blood brain barrier could affect some people ,ie eye contact and ability to function academically
Change the diet with exercise and more fluids ie water, the ie contact and concentration Confidence and skills will get better
though I also feel the worse autism, ie banging your head against a wall is more on the hereditary scale and is more apparent when very you ie 1 year to 18 months..

Yes, you're right: travelingtarotmancer's association between autism and McDonalds food is a bit silly... because autism is a development disorder that typically starts manifesting at an early age (before age 3) when kids are not yet allowed to eat McDonalds food, etc.

Sorry didn't explain myself very well
I don't think there is a nail association with autism
more to do with the stomach, food intolerances
wheat ,gluten, ibs,
some autism is associated with diet and dietary malfunctions ,intolerances is what is showing on the nails????? The root of the problem
An Auto immune dysfunction,