Search
Who is online?
In total there are 24 users online :: 0 Registered, 0 Hidden and 24 Guests 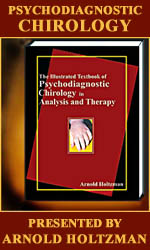 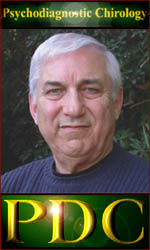 So far, there have not been many reviews presented on the internet on what is likely to be considered as one of the most 'tempting' hand reading systems in the world. And therefore I decided to write one ...

Arnold Holtzman from Yehud, Israel presents: 'The Illustrated Textbook of PsychoDiagnostic Chirology in Analysis and Therapy!'

The Science of Handreading in Psychological Diagnosis. After the publication of his first book in 1983 'Applied Handreading', Arnold Holtzman (Ph.D. in Psychology) presented in 2004: 'The Illustrated Textbook of Psychodiagnostic Chirology in Analysis and Therapy'. The book includes a combination of fascinating materials: a thorough theory about the human hand + beautiful illustrated photo-materials, which often present rather remarkable hand-features. PDC is definitely a fascinating master-piece of modern hand reading, and Holtzman's work will likely be recognized by the experts in this field as one of the few milestones in the history of hand reading.

A QUICK OVERVIEW OF THE FULL REVIEW IN 5 STEPS:

First, this review will describe the postion of PDC in the field of modern hand reading. Second, the introduction of 'The PDC hand model' will describe the theoretic framework behind PDC. Third, the importance of the thumb will be explained. Fourth, a short description of the PDC laboratory testing will be presented. And finally, the position of PDC in academic science and therapy today, will be discussed.
• 1 - The position of PDC in modern science & hand reading
• 2 - The PDC hand model.
• 3 - The thumb is an important aspect in PDC.
• 4 - The PDC laboratory testing
• 5 - The position of 'Psychodiagnostic Chirology' today

And you should not forget to take a further look into Arnold Holtzman's second book, which included many beautiful illustrations & photos

PS. If you 'click' on the BOOK below you can see more pages from Holtzman's book!! 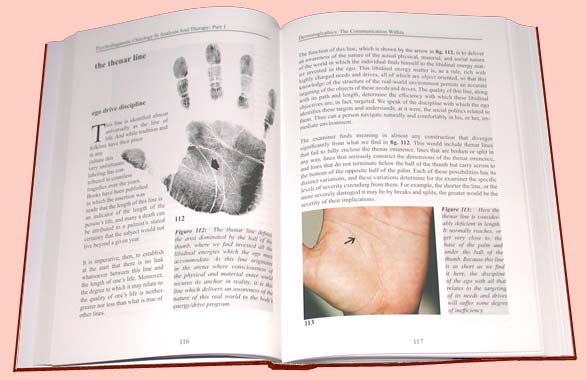 Another lengthy review of Arnold Holtzman's website http://www.pdc.co.il/ was presented a few years ago (BEFORE the publication of Holtzman's second book) by IIHA hand analysts Richard Unger:

Martijn, I read his earlier book many years ago, and I found it overwhelming! Now I am interested in getting a hold of this one, but he has stopped taking orders, and the prices elsewhere have been astronomical. I found his attempt to tie in psychoanalytic theory and palmistry fascinating and innovative. I also met someone who had had his hand read by Holtzman, and he said that it was an enlightening experience (this fellow was very skeptical at that time... but he said that Holtzman's accuracy was remarkable).

Thanks for sharing your feedback!

PS. Holtzman is considering various posibilities, including publishing a reprint, but his thoughts indicate to me that it will probably take another year (likely even more) because he prefers that any new publication should include an update.

There are actually two other, somewhat dated, books that have similar content. Although the two books I am referring to are comparatively quite tiny but do have some interesting content:

1. A doctor's guide to better health through palmistry
by Eugene Scheinmann, M.D.

2. Your Life in Your Hands
by Beryl Hutchinson

What I like about these two books is that the authors' approach is quite unique and non-traditional.

Thanks for your recommendations Truth Seeker!

My palmistry collection of books is starting to expand significantly! Any book that is original and based on sound experience and observation is most welcome!

TruthSeeker wrote:There are actually two other, somewhat dated, books that have similar content. Although the two books I am referring to are comparatively quite tiny but do have some interesting content:

1. A doctor's guide to better health through palmistry
by Eugene Scheinmann, M.D.

2. Your Life in Your Hands
by Beryl Hutchinson

What I like about these two books is that the authors' approach is quite unique and non-traditional.

Hi Truthseeker, good call, both great books! tho I don't see them as similar to "Psychodiagnostic Chirology" - Arnold has his own approach ;-)

Thanks very much for posting this!
appreciated

I am an enormous fan of Arnold Holtzman and have been ever since I became a Certified PalmTherapist (Moshe Zwang technique). I'm so happy to see your comments recognizing and commending him. Thank you Martijin.

It could be the most 'tempting' hand reading systems of Arnold Holtzman in the world as they say, but, in the wrong way especially when I read his analysis of Barack Obama’s hands. Many revelations about Barack Obama not proved right; but, revelations expressed here by members on this forum proved right instead. I think he had been prejudiced then. According to him, he has The Negative Oral Personality, Cognitive Dissonance, Split Loyalties, Impotence of Will, and Paranoia. He further says: This is definitely not a feature one would like to find on a person with the power available to the president.

See further, he says besides that all said above: He has A Vacant Self: The Total Bankruptcy of Motivation. OMG. My question is if Barack Obama has above mentioned personality traits in him than all the American those who have chosen him (once again recently) as there Leader, President are definitely sensless or Arnold Holtzman’s system did not work at all.

Regarding ‘The Deficit Father Syndrome/Peer-Group Rejection’ I have to say that it seems he has linked his life story findings with his formations of hands or fingers. No sign is absolute in itself. Everything affects everything thing. It may be possible but my son has very longer ring finger definitely the index finger substantially shorter than his ring finger. He has never been rejected or abandoned by me. He cares for me and I love him very much. I hope culture matters. He is attractive, popular, earns a lot and provides us all things which he becomes to know, even without asking me. He truly loves me and cares and shares a lot with his mother too.

I am not blaming or criticizing Arnold Holtzman for his analysis of hands of such an extremely popular the most powerful Leader on the Earth which he did in a wrong way. My intention is not to hurt anybody’s believes here. I want to know his or anybody’s convincing reply on the matter for my curiosity only. Thanks.

Thank you Parender for your comment. I really appreciate what you have pointed out and definitely agree that one cannot look at only one aspect in the hand. The analysis that i used to read of his, where his patients. I didn't give much credibility or find the celebrity hands as useful. When studying his comments regarding some of his patients, i found that similar analysis was accurate for some of my clients.

What books or authors do you consider helpful and accurate?
Thank you!

ellencbrown wrote:I am an enormous fan of Arnold Holtzman and have been ever since I became a Certified PalmTherapist (Moshe Zwang technique). I'm so happy to see your comments recognizing and commending him. Thank you Martijin.

The 53 pages addendum featured in 2nd edition of the book is also available for those who already own a copy of the first edition (see also: http://pdc-psyche.net/ind1.htm ).

Martijn, your link doesn't work because of the bracket at the end. reposting it here
http://pdc-psyche.net/ind1.htm

Thanks, I ordered the add on, eagerly awaiting

Thanks for this wonderful reference, I am hoping to have hand analysis as a tool for counseling once I have finished my degree etc.

Hello,
I ordered the addendum to go with my book which I purchased back in 2008, but the website refunded me saying I couldn't purchase because I need the book first..:-( I will try to contact them on the website.

Sari wrote:Hello,
I ordered the addendum to go with my book which I purchased back in 2008, but the website refunded me saying I couldn't purchase because I need the book first..:-( I will try to contact them on the website.

Hi Sari,
I am having problems too, got a similar email, and email seems to be the only way to contact them, don't seem to have any Paypal etc... how did you pay for the book??? I have had to give them my residential address , but being in the bush, we have PO addresses, so have given both

I paid for the book by pay pal, and pay pal refunded me. The text book I have was also paid by pay pal back in 2008. The website doesn't have a contact for queries. I did find an e-mail and wrote to it, but it failed to send saying the email doesn't exist. (bit annoyed here).

I have now succeeded in paying, for some reason the Paypal was not coming up on my Safari or Firefox- maybe my old Mac won't let it update, so looking forward to reading it!

Similar topics
» Seeking to buy Psychodiagnostic Chirology in Analysis and Therapy by Arnold Holtzman
» THE HANDS OF DR. P.G. SHUKLA-A CASE STUDY OF THE TRUTH OF PSYCHODIANOSTIC CHIROLOGY OF DR. ARNOLD HOLTZMAN
» Psychodiagnostic Chirology course in Europe?
» Will any of Arnold's Psychological syndromes make the DSM 5?
» PSYCHODIAGNOSTIC CHIROLOGY