Giving someone "the finger" is one of the basest violations in modern culture, but its origins date back over 2500 years. The first written record of the insult occurred in ancient Greece, where the playwright Aristophanes (the Adam Sandler of his day) made a crude joke mixing up the middle finger and the penis. Even back then, the bird was considered an aggressive, phallic put-down.

It has been argued by anthropologists that the finger is a a variant of a classic "phallic aggressive" gesture used by primates. By jabbing a threatening phallus at your enemy like a wild animal, you aren't just belittling him, but also making him your sexual inferior. Instead of using a real penis, civilized Janes and Platos called upon the substitute wieners within their own hands to mock, threaten, and humiliate opponents.


Read the full story (featured with many interesting anecdotes) at:
http://www.ooze.com/finger/html/history.html 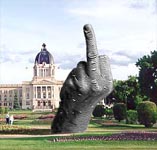