50 cent, successful American rapper, entrepreneur, investor, record producer, and actor. Not to mention drug dealer back in his teens where he grew up in a bad neighborhood. He's turned things around and really does quite a bit of good.

His hand initially caught my eye because of the horizontal line from midway the heart line that goes to close to the base of the pinky finger. What is that?

Also noticed a short life line, what does that mean?

Are there signs of the colorful life in his hands? 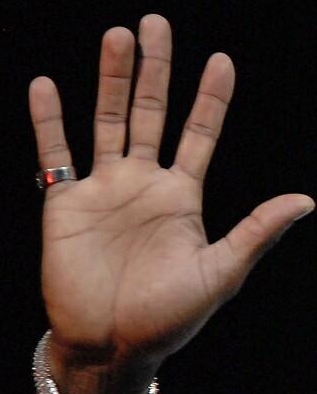 Here's a background, maybe you guys can see some indications.

DRUGS/TROUBLE. Started dealing drugs during his teens, was into guns in high school. Got caught and arrested by metal detector in high school. Went to correctional boot camp.

Also arrested a few times for selling drugs and drug possession. Sentenced to 3-9 yrs. in prison but was sent to some type of incarceration boot camp.

Also in high school, was into hip-hop & rapping, and boxing. Competed in junior olympics in boxing.

SHOT 9 TIMES. 3-4 yrs. after being successful, while getting things from his car outside his house, a gunman walks to him and shoots him 9 times in close range, in the hand (around hit his right thumb, to where the bullet passed through and out his little finger), arm, hip, both legs, chest, and his face (his left cheek).

FULL RECOVERY. Didn't spend much time in the hospital. Use a walker for 6 wks, and full recovery in 5 months. WOW! In the end, aside from the scars, he lost a tooth as slurs a little because of the bullet to the face.

After getting shot like that in close range, not dying, and pretty much unscathed after, he changed believing he must have a purpose.

GREATER SUCCESS. Because of the incident, was dropped by his record company. But was picked up by another company and got bigger deals. Career got bigger and bigger from there, selling millions of albums, and having a successful recording company.

Signed with shoe/sports apparel maker Reebok to create his own line of clothing.

Founding partner in a vitamin water company that was bought by Coca-cola for $ 4B, and he took home $100m after taxes.

Has similar partnerships with other brands from body sprays to condoms, etc. As well as investor is a number of successful brands.

FAMILY Has a child from ex-girlfriend.

Also has a lot of feuds with other hip-hop artists.

What a colorful life.

I think the line you are asking about that you think goes from up from the heart, is an affection line that is coming down and merging with the heart line.

Just look at his powerful thumb! squar'ish' tips of fingersHe has a hardish,hand with elasticity.

His heart, life and head lines are 'sort of' double I mean his fate is acting as a life line and vice versa.

Another thing is that he does not possess is a fairly open hand showing he is not able to respect other's point of view,
.
Is he 43/44 yet?

is that a branch from the headline merging with the heart line, going up between saturn and jupiter...even if its not what does that mean?....he has a double life line not a line of fate ...IMO

notice the thin line attaching the 'original' head line to the...joining the deeper one where it branches[curve] up to the heart line...then merges

also, the 'original' bends toward moon, while the 'thin' curve towards mercury

Similar topics
» 'HANDPRINTS SIGNS OF LIFE' - A father day poem!
» Simplifying Life Purpose, Life Lesson and Life School
» If you like The Jackson 5 and Nirvana... you probably like this as well! :-)
» MICHAEL JACKSON - A tribute to the hands of 'The King op Pop'!
» Question Regarding Life Life Lesson(Finger Print Analysis)